Isis, the renowned goddess of ancient Egypt to Western eyes, is called Aset or Auset in the indigenous Kemetic language of Egypt. For the sake of familiarity, I am using the Hellenic names for Isis and her divine brethren in this post. See footnotes for Kemetic names, resources, and historical articles about Isis.

The legend of Isis and Osiris

In the beginning, Isis was born with her four siblings from the union of Geb (god of the earth) and Nut (goddess of the sky). Osiris, the eldest of the siblings, was given to rule over the earth and humanity with Isis, his sister and queen. The first royal couple ruled the earth with equity, order, and grace: a paradise of harmony and abundance. Yet their brother Set was so jealous of their success he murdered Osiris attempting to take the kingship by force, sealing him into a coffin and throwing him into the Nile.

Devastated at the loss of her husband and king, Isis went in search of Osiris’s body with her sister Nepthys, Set’s wife. When at last they found him, they hid with his body in the Nile delta swamps; Isis set Nepthys to guard his body while she gathered herbs for the elixir that would bring him back to life. Before Isis returned, Set found them and in his rage cut his brother’s body to pieces, scattering them far and wide across the land and into the Nile. Grief stricken but undeterred, Isis and her sister scoured the land, recovering all the pieces of Osiris’s body save for one, his penis. This had been thrown into the Nile and devoured by fish.

Although he could not be made whole again, Isis used her magic to revive him in his mummified state. Knowing that he would no longer be allowed to rule over the earth incomplete as he was, she hovered over him in the form of a kite (a kind of falcon), drawing his essence into her and becoming pregnant. In some versions of the story, Isis restores his ability to impregnate her by shaping a phallus for him out of clay. In either case, Horus, this child born of magic would grow righteous and powerful, eventually reclaiming his father’s kingship over the land.

Osiris was made ruler of the Underworld, where Isis and her sister were often pictured guarding him in the form of sacred kites. Horus challenged and defeated his uncle Set and restored order, ruling over Egypt in jubilance and prosperity with his mother and aunt as consorts.

The etymology of the Kemetic Aset is said to mean “seat” or throne. In early Kemetic art, Isis wears the symbol of Osiris’ empty throne in her headdress, and once Osiris passed into the Underworld, the power of that throne was inherited by her son. Horus as the just and rightful ruler soon became synonymous with kingship in the Dynastic periods—with Isis at his side: his mother, protector, and royal counsel. But as time went on, Isis became even more popular and revered as the Mother of every Pharaoh, eclipsing her son entirely and becoming the preeminent goddess of Egypt. Her virtues as a devoted wife, selfless mother, healer, and protectress were widely praised, and her magical powers (not the least of which was raising the dead) were thought to be unparalleled. Over the centuries her worship grew so ubiquitous that her cult spread throughout the Mediterranean and across Europe; temples to Isis have even been discovered as far away as India. It is also believed that the devotional iconography of Madonna and Child in Christianity was heavily influenced by ancient representations of Isis and Horus. It is this syncretism that earned her the title “Goddess of 10,000 names.”

There are many tales of royal mothers holding the reigns of power while their infant sons mature enough to assume the throne of their birthright. But only the goddess Isis roundly superseded her role as Mother of the King to become (or perhaps return to) an even more powerful deity in her own right, crossing the divides of land, sea, and culture. Throne, Queen, Mother, Goddess of All. In a time when patriarchal systems were beginning to take root all over the ancient world—Isis reigned supreme in Egypt.

Isis as Throne represents the great Goddess as the seat and source of all power, the Earth itself; the center of being and physical existence. This resonates deeply with her power to create life, heal life, and reanimate life. 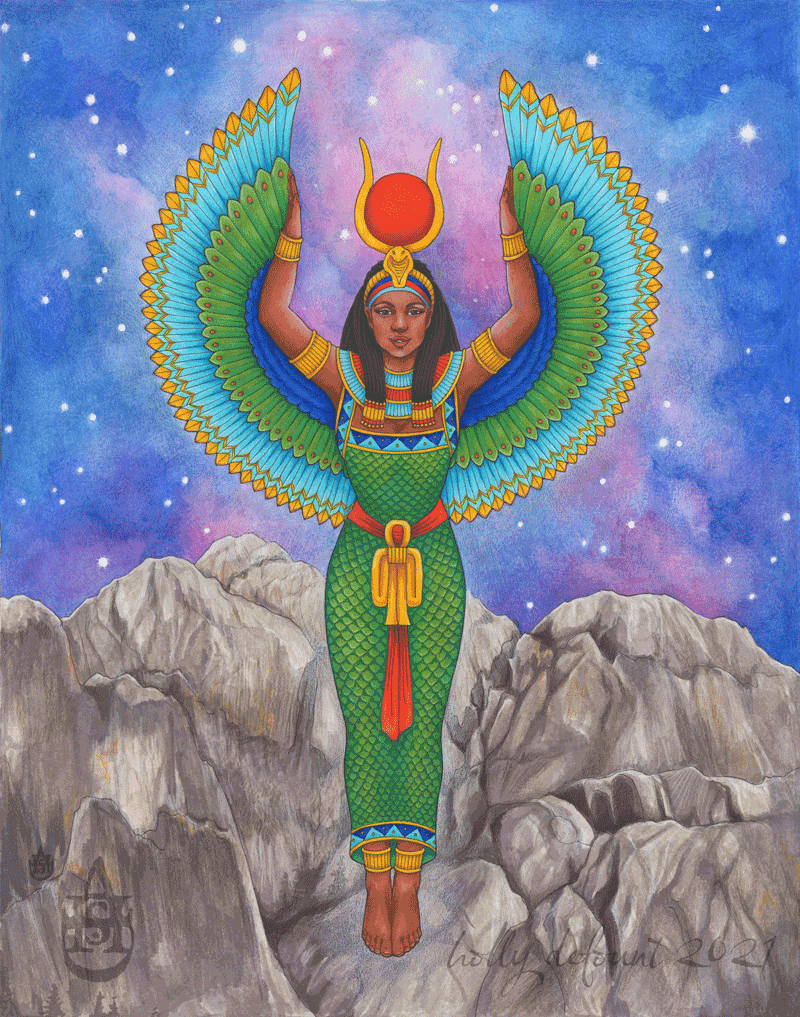 We chose to picture the Goddess of 10,000 Names hovering before the landscape of the Castle Crags wilderness in Siskiyou county. This remarkable place was the site of a protracted battle in 1855 between the local indigenous peoples and gold rush miners who had invaded the land and destroyed its resources in search of a rumored lost mine. Amidst the battle’s fervor of greed, violence, and contagion, it is said a group of native women, infants and children were massacred in their sleep, ambushed by drunken sailors. Most of what we know about the battle today and its repercussions comes from the writings of Joaquin Miller, legendary Mt Shasta “scoundrel and scholar,” who allegedly witnessed and participated in the events as a teenager. This tragedy remains a deep wound on Mt Shasta’s native peoples, stained with their blood and the loss of their sacred lands.

In the Mt Shasta Goddess Temple, Isis is honored as “the Good Queen who cares for the land, its rulers, and its people is known for a wide variety of powers: the power of magical utterances, the power of water and rain, the power of the stars, of alchemy, of raising beings from the dead. She is goddess of fertility, magic, and transcendent wisdom.” (Learn more about devotion to Isis at the Temple.)

Isis’s ultimate power is that of elemental, alchemical transformation; and she is shown rising above Castle Crags, lifted by her jeweled wings and radiating the magic of healing, grace, and absolution for the evils perpetrated on the land.

Tipping At The Precipice

It’s no secret that American democracy has been hanging by a thread for four years, having been steadily and methodically chipped away for decades in partisan power grabs. Through blatant and egregious displays of authoritarianism, white supremacy, racial violence, hateful and divisive rhetoric—we’ve endured a four year battle for the soul of America that, stained with blood and loss like Castle Crags, has left a wound so deep it is hard to envision how we will heal from it.

And yet we find ourselves at the outset of 2021 on a precipice of hope. The potential is emerging for healing, equity, and truth. We are about to usher in a new President and the first woman—a black woman, an East Indian woman—to hold the office of Vice President in the history of this country. It is a precipice of almost unbearable joy. To say I’m cautiously optimistic still seems too rosy a term, the damage done to our democracy and national character has been so profound. But it feels to me that the “throne” of American politics has finally been wrested from the hands of the unworthy, our modern Set has been defeated, and we must now reclaim the scattered remains of our integrity and breathe into it new life.

It is no secret who we must thank for dismantling the debased “throne” of American power in 2020, so long built on racist institutions and the backs of people of color.

Black women have borne the burden of this country’s injustices for literally centuries, and they are the ones who—despite being continually blamed, mocked, silenced, arrested, and murdered—stood up for its people and our future. Black women are the reason Georgia elected a Democratic president for the first time since 1992. Black women are the reason Georgia flipped 2 Republican Senate seats and leveled the Senate after years of gerrymandering and voter suppression aimed at them.

Since 2016, women of color (and women as a whole) have been elected to public office in record numbers, from local municipal roles to congressional seats. The demographic breakdown of our elected officials is experiencing a sea change; the throne is evolving. Expanding. Transforming.

The influence of Isis is everywhere, and there’s never been a time in history we needed it more. She is rising, and so shall we.